On Tuesday 13 th November, we’re going to be part of a nationwide attempt to set the record for the world’s biggest practical science lesson in multiple venues. It’s going to involve the whole of Year 8 as they conduct fun experiments to calculate a value for the earth’s gravity. Bean-bags and yo-yos are at the ready! Joining us in the attempt will be 24 other schools who, like us, are part of the Girls’ Day School Trust (GDST), the leading group of independent girls’ schools in the UK. The attempt is being made as part of this year’s celebrations of the GDST’s 140 th anniversary. Over 2,250 pupils will be participating altogether. We’re following guidelines set by Guinness World Records (GWR), and everyone’s very excited. Not just the girls, either! 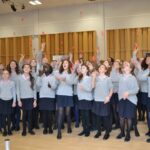