Who says girls don’t do physics?

Astrophysicist, forensic scientist, pharmacist and orthodontist; along with doctor and vet, these were just some of the scientific careers that the 68 girls of Year 8 at Sydenham High School said they aspired to pursue as they attempted to enter the world record books today (Tuesday 13 th November).

The girls are amongst some 2,400 girls at 26 Girls’ Day School Trust across the country measuring gravity in a bid to set the record for the world’s biggest practical science lesson in multiple venues.

Two specific experiments recorded the value of acceleration due to gravity. One measured the time taken for an object to drop a set distance, and the other timed a swinging pendulum.

“This exciting record attempt will also be part of our own 125 th anniversary celebration,” said Sydenham High’s Headteacher, Kathryn Pullen. “It’s crucial to nurture more women scientists so it’s disturbing to think that nearly half of all co-ed maintained schools in England do not send even one girl on to do physics at A-level.

“In the girls-only environment, all science subjects are hugely popular and successful. At Sydenham High, around a quarter of our girls study physics in the Sixth Form and do very well. The enthusiasm from our Year 8 girls for participating in today’s experiment indicates that we’ll continue to buck some of the less encouraging educational trends.” 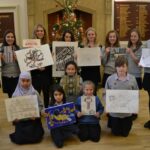