Summer Fair and Fashion through the Ages

The Dining Room became a stage and catwalk; the Astroturf, a bouncy assault course and the lawn and Lecture Theatre, indoor and outdoor marketplaces for the school’s Summer Fair on Saturday.

As part of the school’s 125th birthday celebrations, the PSA staged a pageant of Fashion through the Ages. The show told the story of the school’s development through the decades, featuring girls dressed in the school’s uniform as well as the fashions of the time.  There were girls in the full length skirts for playing hockey in Victorian times, the drop-waisted flapper style uniforms of the 30s,  the changing hemlines of the 60s (short), 80s (long) and the gradual disappearance of ties, boaters and white gloves as uniforms became less formal and more practical for the active lives of today’s students. 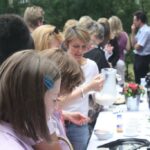