It might have been cold outside but the temperature was certainly high in the school’s Recital Hall on Thursday afternoon, as five Year 11 GDST school speakers battled it out in the GDST Chrystall Prize semi-final.  Sydenham High’s Katie Sawers was up against contestants from Blackheath High, Bromley High, Croydon High and Sutton High in a close contest of debating skills.  The topics were:-
·         The legality of the possession of weapons in some states of the USA should be reconsidered (Blackheath High)
·         Should we lower the age of voting to 16? (Bromley High)
·         Being young is over-rated (Croydon High)
·         Disparity in gender treatment as it stands today gives rise to grave injustice (Sutton High)
·         White males continue to dominate the English curriculum (Sydenham High)
The five girls delivered their speeches with great professionalism and then took questions from an invited Year 10 audience.  Each speaker was judged on a number of criteria, including: their ability to engage an audience and answer questions; their grasp and research of the subject matter and their clarity of expression.

The adjudicators – Wimbledon High Head of English Deborah Cusack, Dulwich College Deputy Master Simon Northcote-Green and Former Portland Place School Headmaster Tim Cook – were very impressed with all the contestants. Katie Sawer and her speech co-writers, Evie Richards and Zoe Macormack, were praised for showing the best overall research but first place in the end went to Bromley High’s Annie Thorpe who will now go through to the Chrystall Prize final.

The Chrystall Prize competition was set up in memory of Chrystall Carter, a former legal advisor to the Girls’ Day School Trust, by her husband following her untimely death in 1999, to mark her commitment to the girls, her pleasure in their success and her belief in the power of argument. 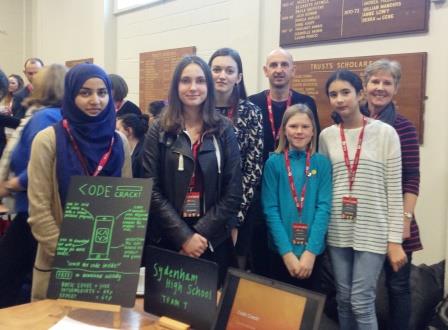