Girls have a ball with Apprentice-style charity challenge

A grand masquerade charity ball, taking place tonight (3 April 2014), hopes to raise thousands of pounds for disabled mobility charity WhizzKidz, thanks to the enterprise of a team of 12 and 13 year olds from year 8.

The idea of holding a Grand Charity Ball came about when class 8Y decided that holding cake sales and sponsored silences would not enable them to raise the kind of money needed to help their chosen charity as part of the annual Sydenham Apprentice challenge.  WhizzKidz provides disabled children with the essential wheelchairs and other mobility equipment so they can lead fun and active childhoods.  A wheelchair costs around £1,000 so fundraising needed to aim high.

Having secured the school’s main hall as the venue the girls hit phones and email to cajole, beg and sweet talk everyone they could think of into helping them make their plan a reality.  This included collecting an array of desirable raffle prizes worthy of a professional charity fundraiser.  Items include: a designer dress belonging to Strictly contestant and Countdown presenter Rachel Riley; a necklace designed by Alex Monroe (whose exclusive jewellery is worn by the likes of Sienna Miller); tickets to see Diversity; a pair of boxing gloves signed by David Haye; football shirts signed by the Arsenal men’s and women’s teams; tennis memorabilia signed by Novak Djokovic and Rafa Nadal and a pair of super-cool Beats headphones.

Ball and raffle tickets have been selling well but the girls left nothing to chance and also set up a Just Giving page to capture donations for those unable to come to the event itself.  They have even sold advertising space to local firms and services in their event programme.

Everyone was amazed and impressed at the girls’ ingenuity and organisation – but then that’s the difference that a Sydenham High education can make. “The event always brings out the best entrepreneurial and charitable spirit in the girls,” said Head of Year 8, Mrs Philippa Cooper, who first devised the Sydenham Apprentice challenge a few years ago. “The efforts of this year’s teams have really raised the bar.”

“Having a great idea takes inspiration but a great idea is only the start,” said Headteacher Kathryn Pullen.  “The difficult part is having the drive, determination and ability to work as a team in order to turn that idea into reality.  Some might have thought that organising an event on this scale simply couldn’t be done but in true Sydenham High spirit the girls made it happen – and in style.”

To donate visit their Just Giving page at: www.justgiving.com/lexie-webb1 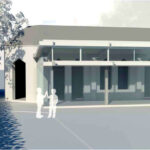 Dining Hall and kitchen expansion gets go ahead